Richard Cole, Co-pilot and last survivor of the Dolittle raids on Japan has died aged 103

This is a terrific piece by Richard Goldstein of the New York Times. It really captures the courage, determination and integrity of these aviators and gives a sense of their commitment to their country and their duty. It’s well worth reading. MC.

Richard E. Cole, who was Jimmy Doolittle’s co-pilot in the lead plane of a storied mission in the history of American air power, the bombing raid on Japan in retaliation for its attack on Pearl Harbor months earlier, died on Tuesday 9 April 2019 in San Antonio, Texas. He was 103 and the last survivor of the 80 Doolittle raiders, who carried out America’s first strikes against the Japanese homeland in World War II.

His death was announced by Gen. David L. Goldfein, the chief of staff of the Air Force.

The Doolittle raid was a low-level daylight attack in April 1942 that resulted in only light damage to military and industrial targets. But it buoyed an American home front reeling from unbroken reverses in the Pacific, beginning with the Pearl Harbor attack on Dec. 7, 1941, and it shattered the Japanese government’s assurances to its people that they were invulnerable to an American air attack.

It also prompted Japan to launch a naval attack on the American base at Midway in the mid-Pacific in June 1942 out of the mistaken belief that the Doolittle bombers had departed from an aircraft carrier based there. The Americans, having broken the Japanese codes, knew the attack was coming and dealt the Japanese Navy a major defeat.

The carrier Hornet carrying the bombers used in the Doolittle raid on Japan in April 1942. “Everyone prayed but did so in an inward way,” Mr. Cole recalled. “If anyone was scared, it didn’t show.”  Credit U.S. Air Force

The commander of the American bombing raid, Lt. Col. James H. Doolittle, was awarded the Medal of Honor, becoming one of the nation’s first heroes of World War II.

The raiders’ story was reprised for succeeding generations at their annual reunions. Mr. Cole was among three survivors at the airmen’s final reunion, on Nov. 9, 2013, Veterans Day weekend, at the National Museum of the U.S. Air Force near Dayton, Ohio.

On the morning of April 18, 1942, 16 Army Air Corps B-25 bombers flew to Japan off the aircraft carrier Hornet from a point more than 650 miles offshore.

Doolittle and Lieutenant Cole alternated in flying their bomber, armed with high-explosive and incendiary bombs.

“Everyone prayed but did so in an inward way,” Mr. Cole recalled in an account for the Air Force information office in 1957. “If anyone was scared, it didn’t show.”

Then came a moment that perplexed Doolittle. As Mr. Cole remembered it: “The tune ‘Wabash Cannonball’ kept running through my mind. One time I was singing and stomping my foot with such gusto that the boss looked at me in a very questioning manner, like he thought I was going batty.”

The five-man crew of the Doolittle plane spotted more than 80 Japanese aircraft while approaching its target area, the western section of Tokyo. But no fighters attacked them, and antiaircraft fire made only a few holes in the bomber’s tail.

The lack of a formidable Japanese response evidently resulted from their belief that an American air attack was improbable, at the least. And the relatively few Doolittle bombers in the mission did not suggest to the Japanese that a large-scale strike was in progress, one that would require a furious response.

After dropping its bombs, the plane with Doolittle, Lieutenant Cole and their navigator, bombardier and engineer/gunner descended to treetop level to avoid flak. To the Japanese civilians on the ground in Tokyo, it seemed to be just another plane in the skies that day, when a scheduled civil defense drill was being conducted.

“People on the ground waved to us,” Mr. Cole remembered. “We could see the moat, the Imperial Palace and downtown Tokyo.”

After carrying out the bombings, the 16 planes were supposed to fly on to China and land at Nationalist Chinese airstrips, since they could not return to the Hornet. Army bombers were not designed to take off from or land on aircraft carriers, and the Doolittle planes had barely cleared the approximately 500-foot deck of the Hornet in their departures.

The planes ran low on fuel after their bombing runs, and none made it to airstrips prepared for them by the Chinese. Fifteen crash-landed in Japanese-occupied territory or ditched off the Chinese coast, and one plane flew on to the Soviet Union.

Doolittle, Lieutenant Cole and the other three crewmen of their plane bailed out in rain and fog soon after their bomber crossed the Chinese coast as darkness arrived. Lieutenant Cole landed in a pine tree atop a mountain and was unhurt except for a black eye. He made a hammock from his parachute and went to sleep. At dawn, he began walking, and late that day he made contact with Chinese guerrillas.

He was soon reunited with Doolittle, who had come down in a rice paddy, and their three fellow crewmen. The five joined up with other stranded airmen who had been rescued. The Chinese took them all on an arduous journey, much of it by riverboat, to an air strip, where they were picked up by a United States military transport plane and flown to Chungking, the headquarters for the Nationalist Chinese.

Three of the 80 Doolittle raiders were killed in crash landings or while parachuting. Eight others were captured by the Japanese. Three of them were executed, another died of disease and starvation in captivity, and four survived more than three years of solitary confinement and brutality.

The raid became even more the stuff of legend when it was dramatized, with the war still on, in a 1944 movie, “Thirty Seconds Over Tokyo,” based on a book of the same title by Ted W. Lawson, a pilot in the raid. Spencer Tracy played Doolittle. (Lieutenant Cole was not portrayed on the screen.)

After the Doolittle mission, Lieutenant Cole flew transport planes over the Himalayas in the China-Burma-India theater

Richard Eugene Cole, who was known as Dick, was born on Sept. 7, 1915, in Dayton. He became enthralled with flying as a teenager when he watched Doolittle, a trophy-winning aviation pioneer, making test flights from an airfield there. 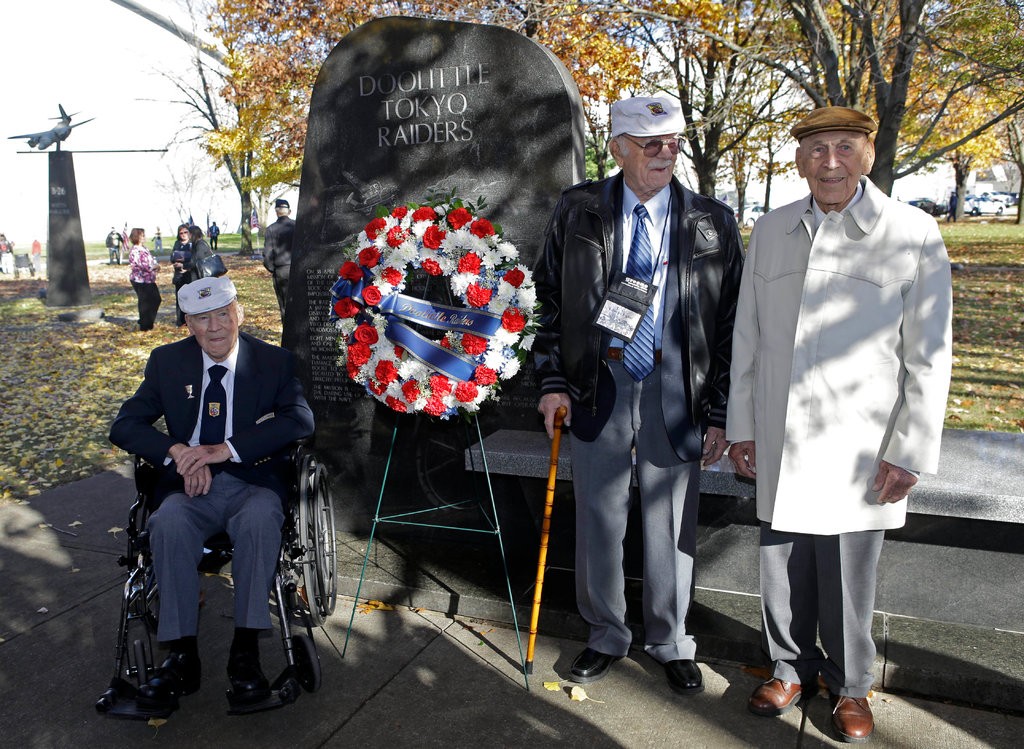 Mr. Cole, right, joined two other surviving members of the Doolittle raid, David Thatcher, left, and Edward Saylor, for a reunion in 2013. They gathered outside the National Museum of the U.S. Air Force near Dayton, Ohio.

After attending Ohio University, he enlisted in the military in November 1940. He flew Army Air Corps planes seeking Japanese submarines off the West Coast before he was chosen to be among the volunteers for what was described as a dangerous mission, with many of the details to come later.

Lieutenant Cole was the co-pilot on a training flight in Florida when its pilot became ill and Doolittle filled in for him. Doolittle was so impressed with how the crew worked together that when the ailing pilot was unable to return to duty, he became the pilot for that crew in the raid.

Mr. Cole retired from the Air Force in 1967 as a lieutenant colonel with three Distinguished Flying Crosses. He settled in Comfort, Tex., about 45 miles northwest of San Antonio, and owned a citrus farm there. He was the subject of a 2015 book, “Dick Cole’s War: Doolittle Raider, Hump Pilot, Air Commando,” by Dennis R. Okerstrom.

Mr. Cole’s survivors include his daughter, Cindy Cole Chal, and his son, Richard. His wife, Lucia Martha (Harrell) Cole, who was known as Marty, died in 2003.

The city of Tucson donated 80 silver goblets bearing the raiders’ names when it hosted their 1959 reunion, with the names of each airman engraved both right side up and upside down. At each gathering thereafter, the survivors turned down the goblets representing their fellow airmen who had died since the previous reunion — though their names, having been duplicated, remained right side up — and they toasted all the departed.

The raiders had planned to hold annual public reunions until only two remained, when they were to uncork a bottle of cognac — vintage 1896, the year of Doolittle’s birth — for a private final toast.

But early in 2013, they announced that their last public reunion would be held that April at Fort Walton Beach, Fla., where they had trained, and that they would have a final, private reunion later in the year, no matter how many raiders were left.

As a centerpiece of the Florida reunion, Mr. Cole flew a restored B-25 Mitchell bomber, alternating at the controls with the plane’s owner, Larry Kelley, during a 40-minute flight over Florida.

Mr. Cole made a fine landing, then stuck his head out the cockpit window and told reporters: “It’s the same as it was then. All I did was prove how rusty I am.”

When the remaining raiders held their final reunion in November 2013 — an invitation-only event attended by more than 600, including family members and descendants of the men on the mission and the Chinese villagers who aided them — Mr. Cole was joined by Edward J. Saylor and David J. Thatcher, who were engineer-gunners on the raid. The fourth surviving raider, Robert Hite, a co-pilot who had been captured by the Japanese, was unable to attend because of health issues. All were in their 90s. (Mr. Saylor and Mr. Hite died in 2015 and Mr. Thatcher in 2016.)

Gen. Mark A. Welsh III, the Air Force chief of staff at the time, said that the Doolittle Raid had bestowed “a gift to a nation at war.”

Mr. Cole, who built the display case holding the goblets, which are on permanent display at the Air Force museum, then offered the final toast.

“To the gentlemen we lost on the mission and to those who have passed away since,” he said. “Thank you very much and may they rest in peace.”

In September 2016, tribute was paid to the Doolittle Raiders once more when Mr. Cole attended a ceremony in Washington, at which the Air Force announced the naming of a new long-range bomber it envisioned. It would be the B-21 Raider. 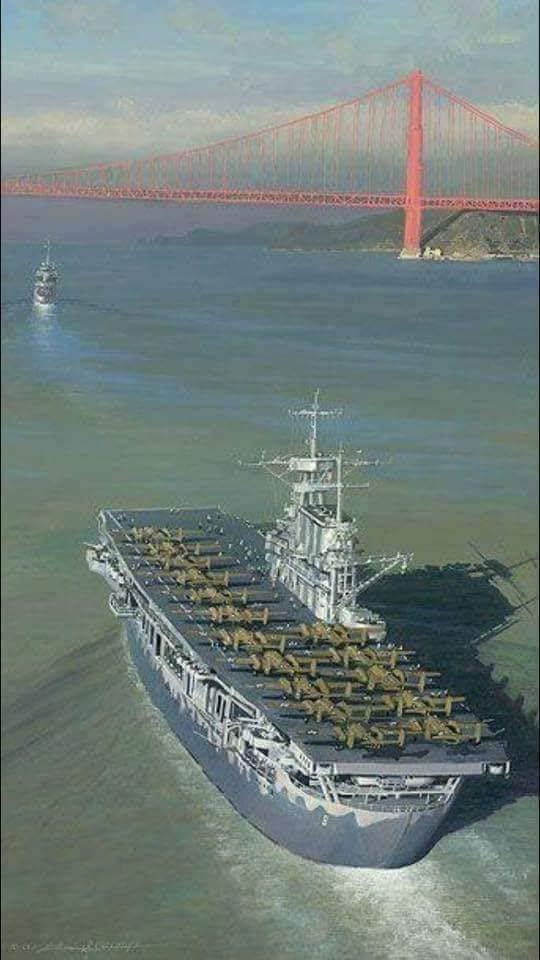 In a rare colour photograph, the U.S.S. Hornet leaves San Francisco, enroute to launch Doolittle’s aircraft against Japan. The B-25 bombers were too large to be taken below so they were carried exposed on the flight deck.